So I went to the Melbourne Oz Comic Con on the weekend and it was a great deal of fun. The organisation was quite terrible and the venue way too small but as I primarily went to meet fellow fans and cosplay, it didn't really bother me. It was my first time properly cosplaying Sherlock at a Convention and it was brilliant being able to meet and chat with fellow fans over the show. Sunday we managed to collect a group of Viclockian cosplayers and have big and utterly fun photo shoot.

I did a few different versions of Sherlock over the two days- Standard Sherlock (with riding crop and violin), Harpoon Sherlock and Reichenbach Sherlock. (I am not sorry >:D) I also planned on doing Sheet!Lock but my sheets were too transparent so that fell through. :(

Anyway instead of going on with boring, mindless chatter here be photos of the Sherlock and Reichenbach photo shoot with suprise guest star: 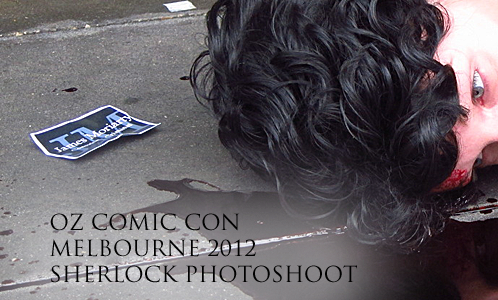 Happily ever after…
What's Harry going to do now that the series is over?
Reply 736
He and his world will stay in my heart forever and I will return to it countless times.  As long as this story is loved and read it will always continue. ♥♥♥

It must be love
Do you remember your first crush? Did you ever tell that person about your feelings?
Reply 853
HAHAHA YES!

Did I tell him about my feelings? Sure if you count chasing him around my mothers house trying to kiss him.

OH GOD THIS JUST MADE MY DAY/YEAR/LIFE. IT GETS FUNNIER EVERY TIME I LOOK AT IT. XDDDDDD

Since moving out into the country I have been more inspired with photography. Unfortunately all I have had on me usually is my iPhone but some of them have turned out alright. While out driving today at dusk it was raining heavily. At one stage it got so heavy I could barely see and I nearly pulled over to wait for the visibiltiy to get better. Anyway this truck comes up behind me and rides me up the ass even though I am going the speed limit in the pouring rain. So whenever we have to stop at lights I would than accelerate fast on green to get a few meters distance between us but he would always catch me.

At one point we were stopped behind a car waiting to turn. It was a country road. Once the car turned I accelerated again to get away and couldn't see that there was a ditch in the road so I drove through the water filled ditch and nearly lost control of the car and crashed which gave the bastard behind me the heads up and got him through it safely. I was very unnerved at this point and getting pissed.

Anyway we get back into a suburban area and are travelling on a wide one lane road. We are headed to a round about and I can see the truck driver about to overtake me. So me being pissed, edgy and quite simply a smartass, I drift into middle of the lane so he can't overtake me safely. Apparently safety wasn't a problem for him because he still overtakes me even though cars were in the opposite lane so he nearly pushes me right off the road.

I was livid at this point so I spent the rest of my time behind him riding his ass and giving him the same treatment. I was beyond caring about the road conditions and driving as recklessly as he was. Unfortunately I was in a small car so I wouldn't have been very intimidating. I almost decided to follow him to his destination and give him a piece of my mind but I really wanted to get home.

So yeah.. there is basically no point to this post except for me to rant about truck drivers being the spawn of all that is evil. And I suffer from vengeful road rage. ....yeah. This what happens one conversation later with my brother...*cough*

Things that Brie really shouldn't do:

~ surf LJ while on the train. Especially if they are funny threads I am reading. I have a whole compartment on the train giving me funny looks. XD

I always get annoyed because my whole life I have practically been called ditzy, blonde, clumsy, off with the fairies etc but unfortunately I do deserve these labels. In the past couple of days I have managed to:

~ fall of a ladder at work for all the customers to see,
~ unintentionally try to steal a job interviewers water bottle and then precede to knock my chair over and back into her glass wall,
~ slip over, fall HARD and nearly rebreak my elbow while running through my kitchen,
~ slam my head in a car door
~ smash the back of my ankle into my solid metal bedframe

The thing is that these are not just from a bad week because I am always bruised from knocking into something and I am constantly dropping things and just being plain pathetic which means that people can never take me seriously :/

My maturity is no better though. My little 7 year old brother spat some food at me so instead of being all mature and telling him how childish he was I went to the kitchen cupboard. grabbed the bbq sauce bottle, snuck up behind him and preceded to squirt sauce over his head. XD
Collapse